I've been an official resident of Louisiana for one week now. When I first got here, things seemed vaguely familiar (since I lived here before about 10 years ago), but it didn't take long for those vague memories to come into focus. So in a way, coming back here has been like coming back home. I'm going to enjoy my time here!

Sunday, there was a guest speaker at Christian Challenge -- Bro. Dale Chapman, Pastor Nathan's father-in-law. The message was definitely not what I had expected. He opened by saying that he was going to address the ladies in the congregation, and that sometimes we accept the norms of our culture/tradition as truth rather than looking to the Bible. With an opening like that, I seriously wondered if he was going to launch into a message on holiness standards... and I was glad I had worn a skirt that morning! LOL! But fortunately, that wasn't the direction that he was headed at all. Instead, he spoke about women who had a tremendous impact on his life. It was good!

Sunday afternoon, a bunch of us went up to Red Dirt in the Kisatchie National Forest. I used to "escape" to Red Dirt fairly often when I first lived in Louisiana. I was eager to get back out there. There had been some fires in the forest, so I wasn't sure if it would be anything like I had remembered, but I was pleasantly surprised. It was better than I had remembered! I'll definitely be headed up there again!

Here are a couple of pictures: 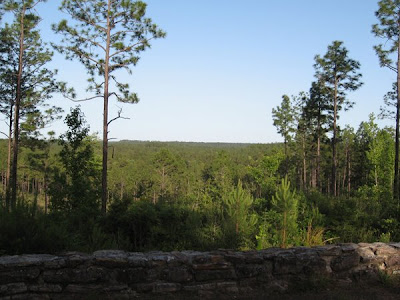 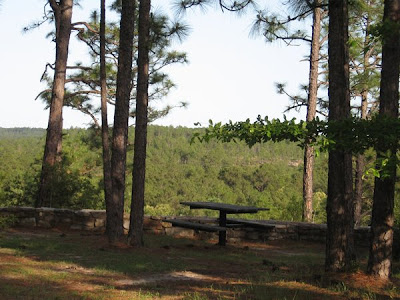 It was such a beautiful day... and I'm looking forward to many more beautiful days here!
Posted by Jenni at 10:32 AM

The Shack by William P. Young (actually a re-read for me)
Spiritual Disciplines for the Christian Life by Donald S. Whitney
Humility & Absolute Surrender by Andrew Murray
Outliers by Malcolm Gladwell

Blink by Malcolm Gladwell
Uprising by Erwin McManus
Look Me In The Eye: My Life With Aspergers by John Elder Robinson
Pagan Christianity by Frank Viola & George Barna
In A Pit With A Lion On A Snowy Day by Mark Batterson
The Grace Awakening by Charles Swindoll
Life Stories by Mark Hall
The Tipping Point by Malcolm Gladwell
How Good is Good Enough by Andy Stanley
God Is Closer Than You Think by John Ortberg
If You Want To Walk On The Water... by John Ortberg
Lincoln's Melancholy by Joshua Wolf Shenk

Your God Is Too Safe by Mark Buchanan
The Purpose Driven Life by Rick Warren (if I can ever find a partner!)


My "wish list" (would love to read them some time):